Ernie LaPointe moved with his mother to Roy’s Point in 1913 and at some later time prepared a hand-drawn map of the area as it was when he lived there. According to his map there were 28 houses at Roy’s Point located either along the Red Cliff Road (Hwy 13) between Lindquist Road and East Bressette Hill Road, or along the railway tracks, plus a boarding house, two saw mills, a box factory, and a lumber yard. 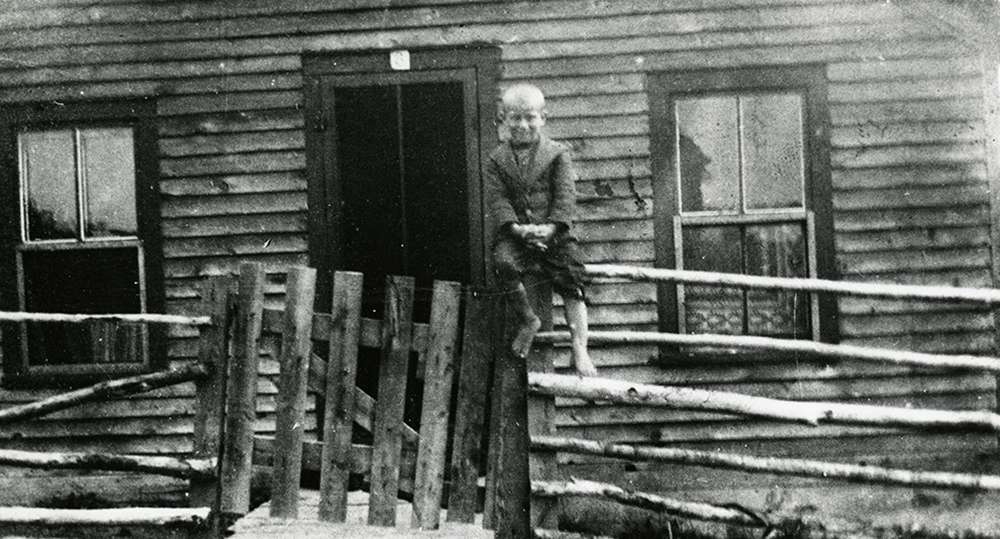 The Federal Census records verified that as of 1910 there were twenty-two families and eight boarders living at Roy’s Point and working for the two sawmill companies or at the box factory in various capacities – sawyers, carpenters, stock pickers, teamsters, a blacksmith, a foreman and a watchman. Thirteen of these men were born in Canada while nine of the men reported that they had been born in different states. A few families owned their own homes but most stated that they were renting, probably homes that had been built by the two sawmill companies.

By 1920 both of the sawmills had closed (in 1913) and the Roy’s Point population was down to 19 families. No one was listed as a boarder and the boarding house was either unoccupied or torn down. Canadian-born residents still dominated but now there were two Scandinavian families and two families from Slovakland (Slovakia). There were a few single men, but most were married and some had up to six to eight children living with them.

The community also had a grocery store located on the Red Cliff Road. Several of the men reported that they were working at a sawmill which would have been the Little Daisy Mill in Bayfield, or in the logging camps on the peninsula. A couple of the men were employed by the railroad. 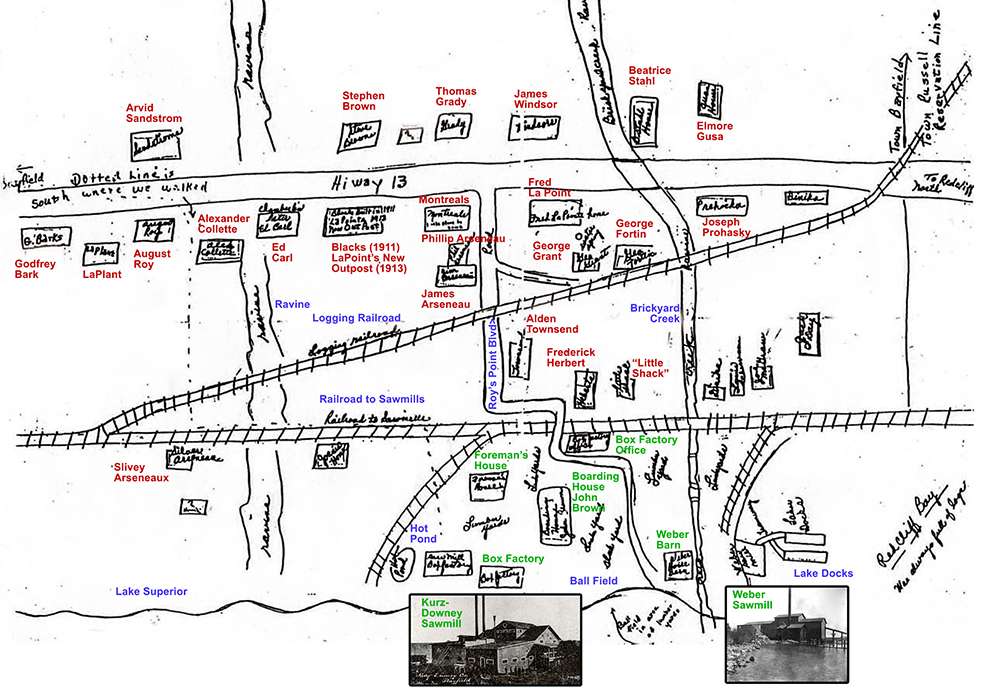 The homes in Roy’s Point would have been pretty rough structures, probably built using scrap wood from the mills with wood shingle siding and tar paper roofing. According to Len Erickson whose mother had lived on the property in the 1920’s, the houses had no concrete foundation and sawdust from the mills was used for insulation and to store ice in the summer. Telephones and electricity had been available to the homes in Bayfield since the 1880’s but there was no electricity or running water in Roy’s Point. Water was hauled from the lake in barrels. The homes were lit by kerosene lamps and the cooking was done on a wood burning stove. In the summer every family worked in their vegetable gardens and canned their produce for winter. They may have had communal vegetable plots and they probably had chickens, pigs, and cows.

The map drawn by Ernie LaPointe indicates that a part of the lumber yard was used as a baseball field and baseball would have been a primary source of entertainment. The children went to school in Red Cliff.

By 1930 most of the families had either moved into Bayfield or Ashland, or owned truck farms in Russell. Several families had left Bayfield and I could not trace them through the census records.

I was told that most of the homes in Roy’s Point were destroyed by fire but a few of the original buildings survived. A two-story house on Red Cliff Road that was used by the Montrauil grocery store is still there. At one point it was run as the Ojibwe Trading Post but it now appears to be vacant. The home that Ernie LaPointe’s family lived in was used by his brother Phillip as the Outpost, a grocery store and bar. It was relocated to make way for the new entrance road into Roy’s Point after Bob Davidson bought the property, and is now the Peterson Grocery Store. (A picture of the original building is in the entry to the store.) The Box Factory office building and the old Transfer Depot were both moved by Wilfred Peterson and are currently located on Highway 13 by the Peterson Fish Store.

Of the 28 families that comprised the Roy’s Point community in 1913, five were related by marriage – the Arseneaus, the Heberts, the Grants, the Fortins, and the Browns (to whom the Erickson family are related). In August 2010 the descendents of the Roy’s Point families gathered for a three day reunion in Bayfield.