This piece is being shared with you by Boreal Forest Citizen and Brickyard Creek community member, Dale Klubertanz. Dale is the chair of the Forest and Watershed Committee and an association board member. You can find him walking with his dog Hattie on the beach and on the trails around his Aspen cabin (#18 on Sophie Lane near the woodland vernal pond).

“Practically no remaining examples of the original boreal forest exist in Wisconsin, except for a few small remnants in the Red Cliff Indian Reservation, which are rapidly being cut. [E]xtensive secondary stands exist along Lake Superior. [B]etter stands are found in deep drainage ravines in the Superior red clays”. – From the “Vegetation of Wisconsin”: 1959. John T. Curtis, UW Professor

The boreal forest is a persevering migrant, which once pinned its hopes at the edges of the last receding glacier, “The Wisconsin.” As an arboreal, post-ice-aged immigrant to the northern and uppermost regions of the North American continent, this native plant community has made its best stand in Canada from Alaska to Newfoundland above the 50th parallel. 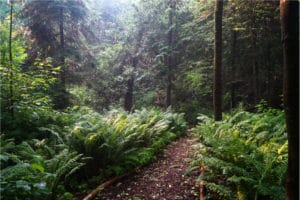 The American boreal forest joins its circumpolar boreal forest cousins stretching across northern Russian and Scandinavia, owing to what once was a connected Bering Strait. Only a relatively small part of this boreal forest had originally made its home at the fringes of the extreme northern regions of the United States and at best, fragments of these, now refugee forests, have survived in some measure of their original splendor.

Around 10,000 years ago, the spruce and white pine each followed the melting glaciers in a rugged venture northward. They were joined by the fir and birch thousands of years later, sorting themselves out as an inter-relational native forest community in an intricate, dynamic amalgamation. Regardless of this dogged determination, they had no idea what they were up against with the coming of the Europeans in the last few hundred years. Aboriginal and vulnerable, these native forest communities have succumbed to the ax, the farm field and notions of “man’s” relationship with the forest.

But by a stroke of good fortune, we at Brickyard Creek have been afforded an opportunity to visit and live in a small and recovering remnant of this ancient boreal forest. Over time, the forest has had an enduring, hard-fast obligation to all its wild and perennial boreal forest citizens: to live among these trees, one will need to participate, fending for the health and regeneration of the forest, even if it is done unwittingly.

After all, the mouse does not knowingly give itself to an eagle so it can recycle the part of the forest it eats and that the eagle cannot. The insect will not intentionally become brunch for the chickadee, to be dispersed back to the soil. Give a single-minded bear a berry and its seed is strategically sown a day after breakfast. As self-interested forest citizens, all wildlife will unwittingly make their contribution to the forest’s natural welfare. It is written in their lease, in an unspoken, time-honored forest agreement.

As relatively new citizens to the boreal forest, we modern humans have a great capacity for awareness to know the value and power of our participation in the life of the forest. We understand that it is through protection and restoration of natural forest systems that we sustain the woodland experience, satisfying a deep, innate yearning for wilderness. We are guided by the wisdom, that to do otherwise is to perhaps unwittingly love the forest in ways that challenge its very livelihood and survival.

As immigrants ourselves into the citizenry of the boreal forest, measured against the mouse, insect and the bear, we have no traditional role in the forest to keep it healthy and renewed. We have come into the forest community by way of our roads and home sites, but for the forest these features represent openings that invite invasive plants like bacteria to an open cut, which is not allowed to heal. Knowing our own place in the forest ultimately asks us to be mindful and creative in finding our role as citizens and to manage our presence within the dynamic boreal forest community. 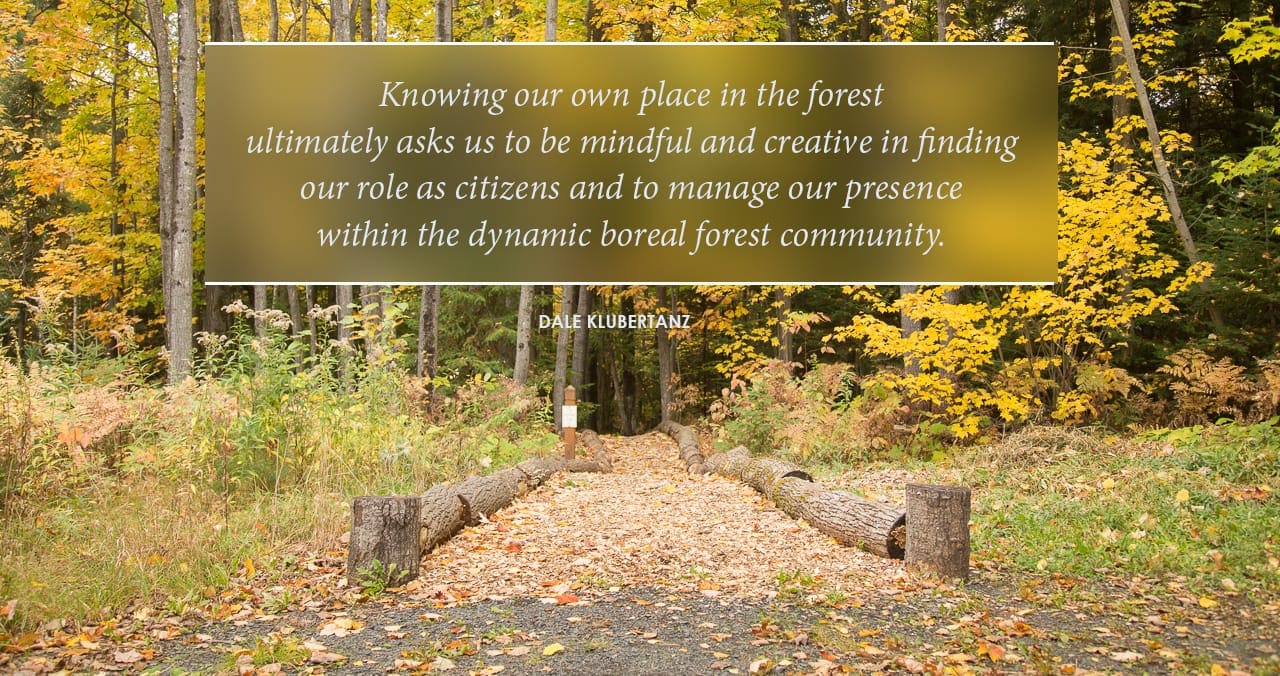 Understanding the natural functioning of the forest can be the first steps of newly sworn-in boreal forest citizens. Knowledge, and then participation in the native community, promises a deeper connection with the forest, wildlife and the people who have become our neighbors in the Brickyard Creek wilderness community. Through this connection we become bonded with a 10,000-year-old journey of the boreal forest, fostering the possibility for it to live on around our homes, inviting us in as authentic forest citizens.

Write for the Boreal Forest Citizen

The BYC Vision Committee invites you to Check Your Pulse, consider these guiding questions, and share your responses with your neighbors on our BYC Community website.

Do you need some inspiration? View the work shared by other community members found in the BYC Library.

If you are willing to share your responses to these original guiding questions with your neighbors, please send them to the BYC Manager, Jeffery Garrett for posting here on our BYC Community website.