Sense of Place – The Good Oak 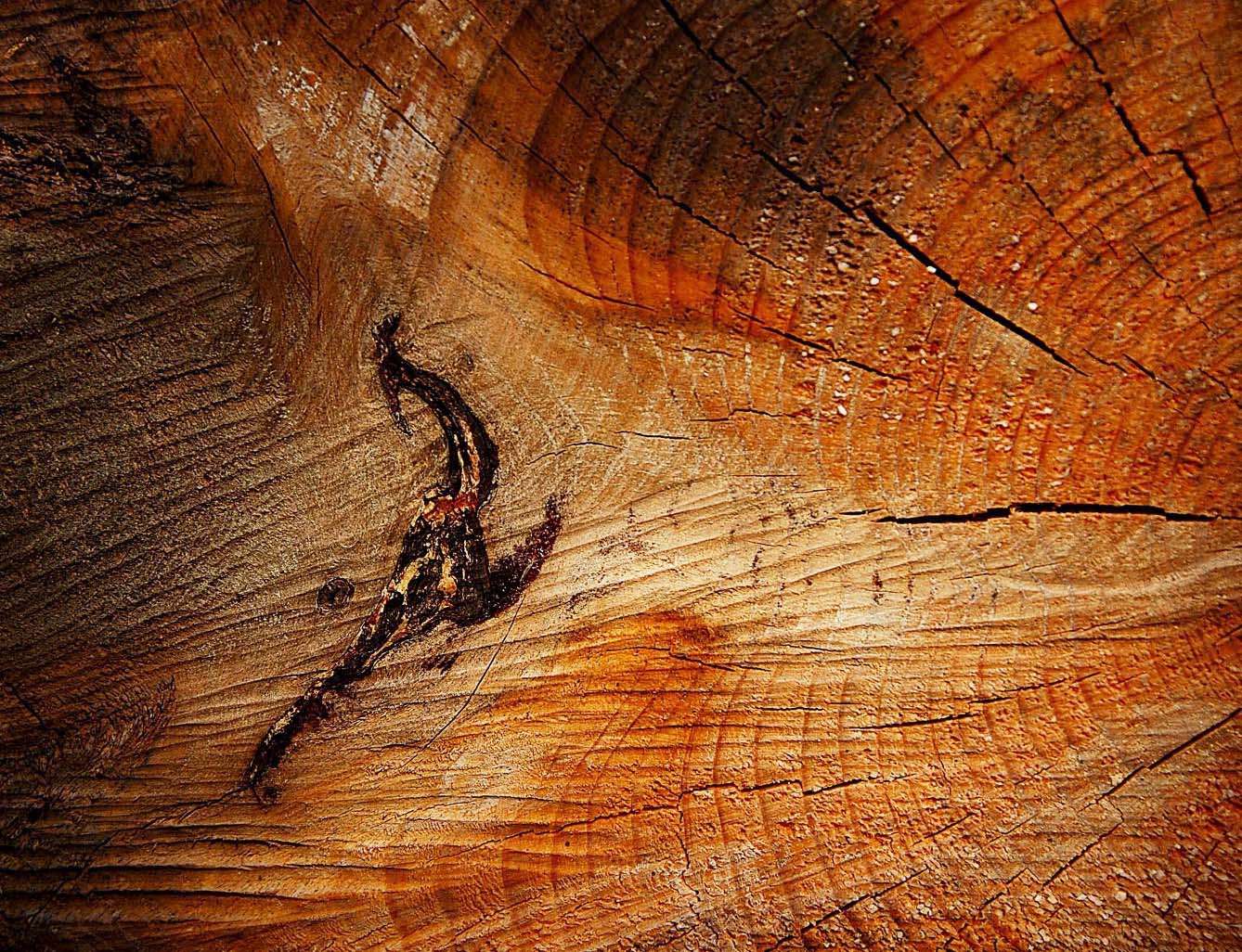 Trees measure time in concentric rings – not hours or days. In this classic essay about time and human history, Aldo Leopold reminds us of the layers of time through the exercise of cutting down a lightning-struck oak, the “Good Oak.”

Read the following essay and then spend some time with the exercise linked below. Consider how time has changed your sense of the Brickyard Creek community by adding layers of experience, knowledge, and joy.

Exercise for this reading

THERE ARE two spiritual dangers in not owning a farm.  One is the danger of supposing that breakfast comes from the grocery, and the other that heat comes from the furnace.

To avoid the first danger, one should plant a garden, preferably where there is no grocer to confuse the issue.

To avoid the second, he should lay a split of good oak on the andirons, preferably where there is no furnace, and let it warm his shins while a February blizzard tosses the trees outside. If one has cut, split, hauled, and piled his own good oak, and let his mind work the while, he will remember much about where the heat comes from, and with a wealth of detail denied to those who spend the week end in town astride a radiator.

The particular oak now aglow on my andirons grew on the bank of the old emigrant road where it climbs the sandhill.  The stump, which I measured upon felling the tree, has a diameter of 30 inches.  It shows 80 growth rings, hence the seedling from which it originated must have laid its first ring of wood in 1865, at the end of the Civil War. ..

It was a bolt of lightning that put an end to wood making by this particular oak.  We were all awakened, one night in July, by the thunderous crash; we realized that the bolt must have hit nearby, but, since it had not hit us, we all went back to sleep.  Man brings all things to the test of himself, and this is notably true of lightning.

Next morning, as we strolled over the sandhill rejoicing with the cone-flowers and the prairie clovers over their fresh accession of rain, we came upon a great slab of bark freshly torn from the trunk of the roadside oak. The trunk showed a long spiral scar of barkless sapwood, a foot wide and not yet yellowed by the sun. By the next day the leaves had wilted, and we knew that the lightning had bequeathed to us three cords of prospective fuel wood.

We mourned the loss of the old tree, but knew that a dozen of its progeny standing straight and stalwart on the sands had already taken over its job of wood-making.

We let the dead veteran season for a year in the sun it could no longer use, and then on a crisp winter’s day we laid a newly filed saw to its bastioned base. Fragrant little chips of history spewed from the saw cut, and accumulated on the snow before each kneeling sawyer. We sensed that these two piles of sawdust were something more than wood: that they were the integrated transect of a century; that our saw was biting its way, stroke by stroke, decade by decade, into the chronology of a lifetime, written in concentric annual rings of good oak.

It took only a dozen pulls of the saw to transect the few years of our ownership, during which we had learned to love and cherish this farm.  Abruptly we began to cut the years of our predecessor the boot-legger, who hated this farm, skinned it of residual fertility, burned its farmhouse, threw it back into the lap of the County (with delinquent taxes to boot), and then disappeared among the landless anonymities of the Great Depression.  Yet the oak had laid down good wood for him; his sawdust was as fragrant, as sound, and as pink as our own.  An oak is no respecter of persons.

The reign of the bootlegger ended sometime during the dust-bowl drouths of 1936, 1934, 1933, and 1930. Oak smoke from his still and peat from burning marshlands must have clouded the sun in those years, and alphabetical conservation was abroad in the land, but the sawdust shows no change.

Rest! cries the chief sawyer, and we pause for breath.

Now our saw bites into the 1920′s, the Babbittian decade when everything grew bigger and better in heedlessness and arrogance—until 1929, when stock markets crumpled.  If the oak heard them fall, its wood gives no sign.  Nor did it heed the Legislature’s several protestations of love for trees: a National Forest and a forest-crop law in 1927, a great refuge on the Upper Mississippi bottomlands in 1924, and a new forest policy in 1921.  Neither did it notice the demise of the state’s last marten in 1925, nor the arrival of its first starling in 1923.

In March 1922, the ‘Big Sleet’ tore the neighboring elms limb from limb, but there is no sign of damage to our tree.

What is a ton of ice, more or less, to a good oak?

Rest! cries the chief sawyer, and we pause for breath.

These things I ponder as the kettle sings, and the good oak bums to red coals on white ashes. Those ashes, come spring, I will return to the orchard at the foot of the sandhill. They will come back to me again, perhaps as red apples, or perhaps as a spirit of enterprise in some fat October squirrel, who, for reasons unknown to himself, is bent on planting acorns.