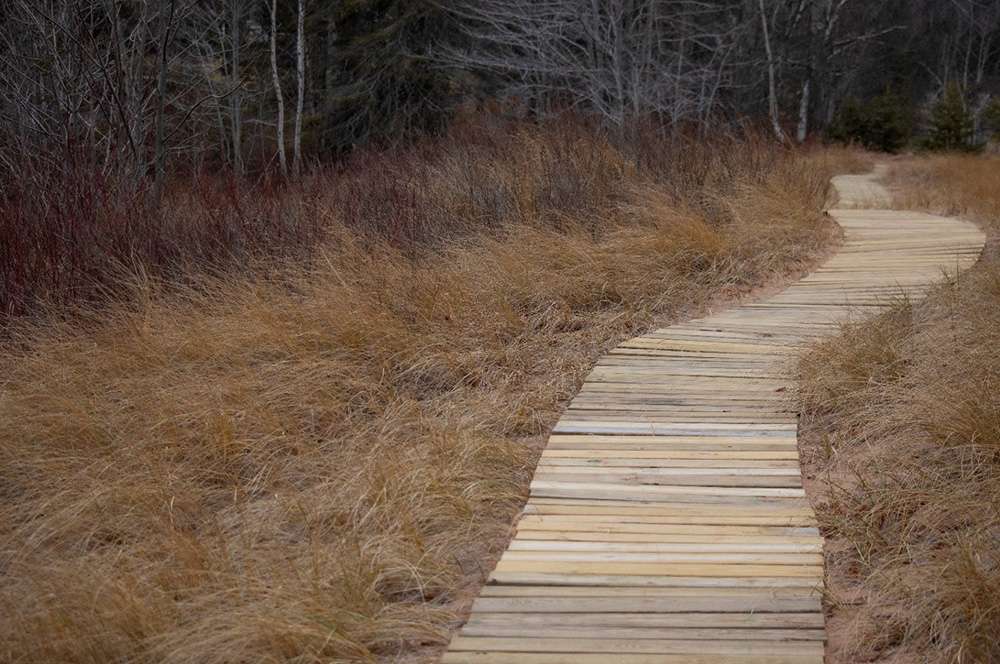 Every day you walk the same path, the same trail, the same stretch of shoreline. Slowly, you begin to take it for granted, missing small changes, gentle reminders that nothing stays the same. Your familiarity has closed your eyes.

Open them, says John Burroughs, by walking the same trail again. “Familiarity with things about one should not dull the edge of curiosity or interest. The walk you take today is the walk you should take tomorrow, and the next day, and the next. What you miss, you will hit upon next time. If Nature is not at home to-day, call to-morrow, or next week.”

In this week’s sense of place exercise, read the following short essay “The Art of Seeing Things” by John Burroughs. Then, go out on a walk. Pick a route you walk often, but perhaps walk more slowly, stop more often, look up and down, and behind you. Try to see beyond the familiarity and into the wonder. Take a photograph, do a sketch or drawing, write a poem or a postcard paragraph that shows something that you have noticed, or seen again but in a new way, on your walk of the well-worn route.

I do not purpose to attempt to tell my reader how to see things, but only to talk about the art of seeing things, as one might talk of any other art. The science of anything may be taught or acquired by study; the art of it comes by practice or inspiration. The art of seeing things is not something that may be conveyed in rules and precepts; it is a matter vital in the eye and ear, yea, in the mind and soul. I have as little hope of being able to tell the reader how to see things as I would have in trying to tell him how to fall in love or to enjoy his dinner. Either he does or he does not, and that is about all there is of it.

Some people seem born with eyes in their heads, and others with buttons or painted marbles, and no amount of science can make the one equal to the other in the art of seeing things. The great mass of mankind are in this respect, like the rank and ﬁle of an army: they ﬁre vaguely in the direction of the enemy, and if they hit, it is more a matter of chance than of accurate aim.

But here and there is the keen-eyed observer; he is the sharpshooter; his eye selects and discriminates; his purpose goes to the mark. The secret is, no doubt, love. Love sharpens the eye, the ear, the touch. What we love to do, that we do well. To know is not all; it is only half. To love is the other half. Love is the measure of life: only so far as we love, do we really live.

If I were to name the three most precious resources of life, I should say books, friends, and nature; and the greatest of these, at least the most constant and always at hand, is nature. Nature we have always with us, an inexhaustible storehouse of that which moves the heart, appeals to the mind, and ﬁres the imagination. Still, even here there is nothing in which people differ more than in their powers of observation. Some are only half alive to what is going on around them. Others, again, are keenly alive: their intelligence, their powers of recognition, are in full force in eye and ear at all times, never oblivious of any interesting feature or sound or object in the earth or sky about them. Their power of attention is always on the alert. They turn to the outward world a more highly sensitized mind than other people.

In a collection of stuffed birds, the other day, I observed that a wood thrush was mounted as in the act of song, its open beak pointing straight to the zenith. The taxidermist had not seen truly. The thrush sings with its beak but slightly elevated. Who has not seen a red squirrel or a gray squirrel running up and down the trunk of a tree? But probably very few have noticed that the position of the hind feet is the reverse in the one case from what it is in the other. In descending they are extended to the rear, the toe-nails hooking to the bark, checking and controlling the fall. In most pictures the feet are shown well drawn up under the body in both cases.

People who discourse pleasantly and accurately about the birds and ﬂowers are not invariably good observers. In their walks do they see anything they did not come out to see? Is there any spontaneous or unpremeditated seeing? Do they make discoveries? Any bird or creature may be hunted down, any nest discovered, if you lay siege to it; but to ﬁnd what you are not looking for, to catch the shy winks and gestures on every side, to see all the by-play going on around you, missing no signiﬁcant note or movement, penetrating every screen with your eye-beams—that is to be an observer.

In the ﬁeld, things escape us because the actors are small, and the stage is very large. The movement is quick across a background that tends to conceal rather than expose it. In the printed page the white paper plays quite as important a part as the type and the ink; but the book of nature is on a different plan: the page rarely presents a contrast of black and white, or even black and brown, but only of similar tints, gray upon gray, green upon green, or drab upon brown.

By a close observer I do not mean a minute, cold-blooded specialist but a man who looks closely and steadily at nature, and notes the individual features of tree and rock and ﬁeld, and allows no subtle ﬂavor of the night or day, of the place and the season, to escape him. His senses are so delicate that in his evening walk he feels the warm and the cool streaks in the air.

As he stands musing in the April twilight, he hears that ﬁne, elusive stir and rustle made by the angle-worms reaching out from their holes for leaves and grasses; he hears the whistling wings of the woodcock as it goes swiftly by him in the dusk; he hears the call of the kill-deer come down out of the March sky; he hears far above him in the early morning the squeaking cackle of the arriving blackbirds pushing north; he hears the soft, prolonged, lulling call of the little owl in the cedars in the early spring twilight.

He reads the subtle signs of the weather. The stars forecast day to him; the clouds at evening and at morning are a sign. When he descends from the hill in the autumn twilight, he notes the cooler air of the valley like a lake about him; he notes how, at other seasons, the cooler air at times settles down between the mountains like a vast body of water, as shown by the level line of the fog or the frost upon the trees.

So far as seeing things is an art, it is the art of keeping your eyes and ears open. The art of nature is all in the direction of concealment. The birds, the animals, all the wild creatures, for the most part try to elude your observation. The art of the bird is to hide her nest; the art of the game you are in quest of is to make itself invisible. Power of attention and a mind sensitive to outward objects, in these lies the secret of seeing things. Can you bring all your faculties to the front, like a house with many faces at the doors and windows; or do you live retired within yourself, shut up in your own meditations? The thinker puts all the powers of his mind in reﬂection: the observer puts all the powers of his mind in perception; every faculty is directed outward. If you are occupied with your own thoughts, you may go through a museum of curiosities and observe nothing.

The book of nature is like a page written over or printed upon with different-sized characters and in many different languages and with a great variety of marginal notes and references. There is coarse print and ﬁne print; there are obscure signs and hieroglyphics. We all read the large type more or less appreciatively, but only the students and lovers of nature read the ﬁne lines and the footnotes. It is a book which he reads best who goes most slowly. He who runs may read some things. We may take in the general features of sky, plain, and river from the express train, but only the pedestrian, the saunterer, with eyes in his head and love in his heart, turns every leaf and peruses every line.

For my part, my delight is to linger long over each page of this marvelous record, and to dwell fondly upon its most obscure text. I take pleasure in noting the minute things about me. One June day, in my walk, as I crossed a rather dry, high-lying ﬁeld, my attention was attracted by small mounds of fresh earth all over the ground. On looking closely, I saw that in the middle of each mound there was a hole not quite so large as a lead-pencil. I had never observed these mounds before, and my curiosity was aroused.

“Here is some ﬁne print,” I said, “that I have overlooked.” So I set to work to try to read it; I waited for a sign of life. Presently I saw here and there a bee hovering about over the mounds. It looked like the honey-bee, only less pronounced in color and manner. One of them alighted on one of the mounds near me, and was about to disappear in the hole in the center when I caught it in my hand. Though it stung me, I retained it and looked it over, and in the process was stung several times; but the pain was slight. I saw it was one of our native wild bees, cousin to the leaf-rollers that build their nests under stones and in decayed fence-rails.

Then I inserted a small weed-stalk into one of the holes, and, with a little trowel I carried, proceeded to dig out the nest. The hole was about a foot deep; at the bottom of it I found a little semi-transparent, membranous sac or cell, a little larger than that of the honey-bee; in this sac was a little pellet of yellow pollen—a loaf of bread for the young grub when the egg should have hatched. I explored other nests and found them all the same. This discovery was not a great addition to my sum of natural knowledge, but it was something. Now when I see the signs in a ﬁeld, I know what they mean.

[W]e must meet nature halfway [with both our eyes and our minds]; it is shy, withdrawn, and blends itself with a vast neutral background. We must be initiated; it is an order the secrets of which are well guarded.