Chapter 9: Prohibition and the WPA

The end of the lumbering industry coincided with the beginning of Prohibition which lasted from 1920 to 1933, which was then followed by the Great Depression (1929 – 1941).
Moonshine stills cropped up on the mainland and on the islands. The uninhabited islands – notably Bear, Devil’s and Sand Islands – were suspected of being way stations for the smugglers bringing alcohol across the lake from Canada into Northern Wisconsin. Bootleggers from Canada may have used Roy’s Point beach and Roy’s Point Road as their access point into the mainland. 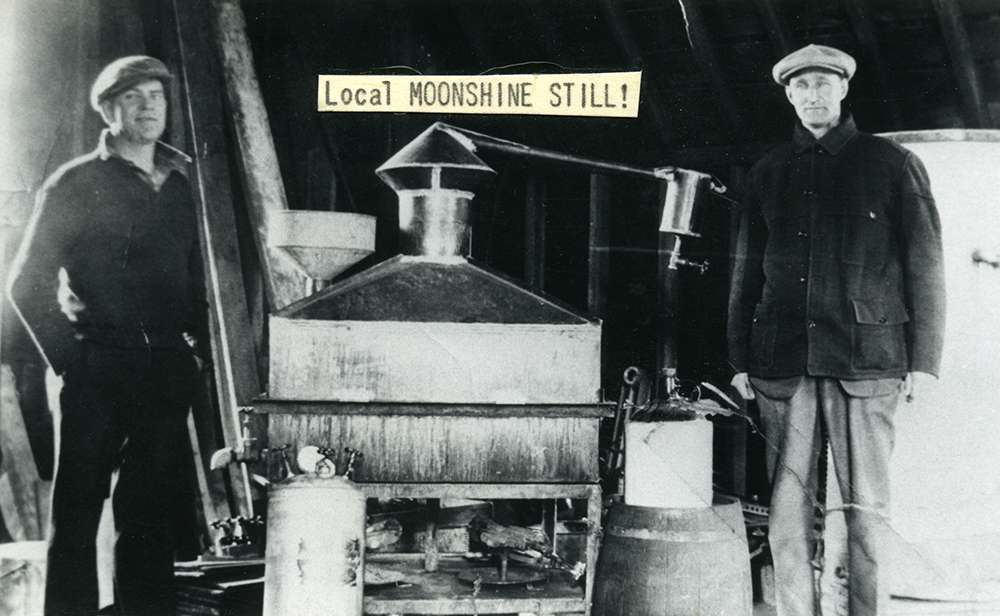 Joe Prohoski, one of the men living on the Red Cliff Road at Roy’s Point, was arrested for operating a still on his property in July 1921. Charles Erickson, who had been “disposing of moonshine whiskey” in town, and Carl Linborn were arrested for operating a still on Erickson’s farm located on Turner Road. Three others were arrested for having a large still on a farm four miles south of Marengo, where forty gallons of “raisin brew” and a complete outfit for distilling liquor was found and seized.

In January 1927 several women from Red Cliff petitioned for the removal of “two filthy booze joints opened on Highway 13 north of Bayfield”. One of these Joints was probably the Outpost located at what is now the entrance for Roy’s Point Road.

The United States economy began to slow down in late 1928, and the stock market crash in October 1929 sent the country into the worst economic depression in its history. Northern Wisconsin was especially hard-hit by the Depression, unemployment, and the severe drought of the 1930’s.

The Work Project Administration (WPA) functioned from 1935 until it was abolished effective June 30, 1943. This was a national program that operated various work projects in cooperation with state and local governments which were required to cover 10-30% of the costs. In April 1935 a group of Bayfield businessmen met to consider local relief projects which could be carried on under the new WPA relief program.

One of the projects that they considered was a nine-hole golf course and recreational facility to be built at Roy’s Point on the 100 acres of land that the city owned following a tax forfeiture. The project was to include a club house to be built on the lake shore “near a splendid, sand bathing beach” which offered “an excellent landing spot for boats”. The property had 25 acres of meadow so an additional 22 acres was going to be cleared for fairways. The project may not have been accepted by the WPA due to the potential title issues following the town’s acquisition of the Roy’s Point property by tax forfeiture.

While the proposed golf course was never built under the WPA program, the Bayfield businessmen never dropped the idea. In 1939 the township brought a quiet title action against the various entities with a potential interest in the land at Roy’s Point and obtained a default judgment declaring the town to be the owner in fee simple absolute. In 1940 it was announced that the city had title to the land and that tentative plans were to convert the property into a golf course and an airplane landing field. These plans were ultimately abandoned.