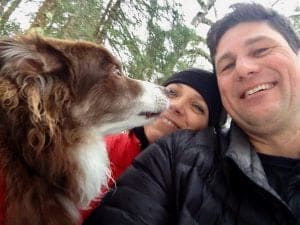 I first experienced Lake Superior on a backpacking trip in the summer of ’96. It was the 4th of July and miserably humid – far too warm to hike. The “big freezer,” as the locals referred to the vast inland sea, did not provide the relief they had promised until the very next day when it snowed. Only a few flakes, but upon seeing the big puffs of white drift down, I turned to my wife, Diane, and stated matter-of-factly, “I need to live near this lake.” As so often happens when one makes such a pronouncement it was only a matter of time before fate directed my life to Bayfield.

Like many, Brickyard Creek was attractive because of the proximity to the lake and the islands. However, I was quickly mesmerized by the towering mix of hemlock, spruce, balsam, and pine that make up the forest. In fact, on my first tour of the property in 2002 I asked Bob Davidson what the place looked like in the winter. Not missing a beat, he stated that it was a “Wonderland,” and I was sold.

Early explorations around the property always ended with a game of fetch with Catch the Border Collie who was often waiting at the end of the sales office driveway with a frisbee in her mouth. I loved her and told David Culberson if she ever had puppies…

Her introduction into our lives changed everything. Beforehand, I spent all my days (and many nights) as a trainer and operations manager for a growing Twin Cities company. While I still worked hard and pursued excellence, I was happily required to take many, many, many hikes along the roughed out trials throughout the BYC property. Of course, we did an excellent job of keeping the path along the creek passable to the beach where we played endless games of fetch. Like mother like daughter I guess.

Admittedly, what I most liked about being in the forest was the way it made me feel. There was something about the density, age or type of trees and plants that brought a sense of awe or even reverence. I didn’t understand it at first, but I knew I had stumbled on a special place. Over the next decade, I took many walks with Dale Klubertanz and other naturalists and learned that we lived within a “pocket” or remnant boreal forest that contained rare plants and trees not found elsewhere on the mainland of Wisconsin.

During this time I was also spending many of my early evenings playing with Sydney’s family and talking to Dave for hours about environmental development practices. I learned that our cottages were designed and constructed so that “blending into nature” was the primary architectural statement. That is when it became clear to me that Brickyard Creek had the opportunity to be world class and my appreciation for the community became more tangible.

In 2011 I saw a need to become involved. I was elected to the Board of Directors and assigned to a committee that oversaw operations. Soon after, I was hired to manage the association with the goal of improving the infrastructure and trail system and creating relationships that could assist the community in reaching its full potential.

The Brickyard Creek Identity Statement is the blueprint for these aims:

“Brickyard Creek is a residential environmental community on the shore of Lake Superior dedicated to active stewardship and tranquility. BYC is dedicated to lake, land, learning, lifestyle, leadership, and legacy.”

The “L” alliteration expanded the idea of who we are and what we can be. Highlighting our community values brought about an evolution that created meaning, initiated action,  and outlined the manager position and goals.

I believe more than ever that we are establishing a community model that is unique, purposeful and remarkable. Together we are becoming a leader and building a legacy.  I am honored to be of service to the Brickyard Creek Community. And I am grateful that Sydney is still walking those trails today.

The Brickyard Creek Manager is the “hands-on, go to” person for all issues relating to the administration, operations and maintenance of the BYC Condominium Associations, The Umbrella Association, the Roy’s Point Shores, and BYC III lake shore property owners; and the common properties thereof.  The BYC Property Manager facilitates communications’ among and between property owners, potential buyers, the board of directors, board committees, contractors, suppliers and a broad network of community partners. As such the Property Manager is the “first call” resource for all administration, operations, and maintenance issues at BYC as enumerated below.

Being the hub of communication at BYC is an essential component of the manager position and key to BYC’s development as a vital, sustainable community.  Skills in information sharing, policy and protocol development and interpretation, conflict resolution, community relations and development are essential as the manager works with:

Board of Directors and Committees

Conduct the following operations and maintenance activities; arrange for, coordinate and oversee the activities provided by third-party contractors as follows:

Provide, arrange for and oversee the following Financial Administration functions: