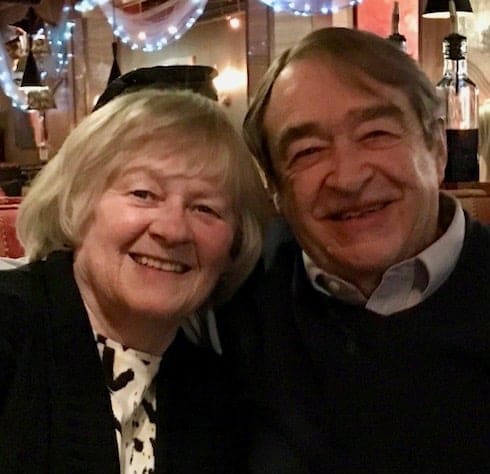 So here we are, what’s your excuse?

Members of the Brickyard Creek community come from many states and many different backgrounds, but all were attracted to the Bayfield area and ultimately Brickyard Creek.

We want to know what drew you here and how you found your way. I’ll start with our story and hope you will send yours for later publication to Dale Klubertanz.

My family started going to Madeline Island in the 1950’s (what my granddaughter calls the “olden days”). We stayed with friends on O’Brien Row in La Pointe. They were part of that large O’ Brien clan which arrived in La Pointe in the early 1900’s. Their cottage is still in their family. Somehow we managed to squeeze 4 adults and 11 kids into the tiny, 1 bathroom cottage. One of the things I loved most about the cottage was a large screened porch set right on the edge of the lake. In big storms the spray from the waves crashing on the rocks would come onto the porch, but, we stayed dry. My memories of that porch are part of what attracted me to the BYC cottages. We spent a lot of time in the lake, never bothered by the cold. Our favorite spot was Big Bay beach and the rocky shore where we jumped from rock to rock and at night built big camp fires. Sailing hadn’t come to Lake Superior yet.

In fact, we would be one of the area’s earliest sailboat owners, but not until the late 1960’s. Back then we co-owned a 35-foot Pearson with my father and Mary and Lars Carlson. We could often sail to Stockton and be the only boat there. There was no park service so we were free to build beach fires and explore at will. Our trips usually consisted of leaving work in St. Paul, Minnesota on Friday afternoon, racing for the ferry to get to the Madeline Island marina, and noisily climbing aboard in the dark. Typically, we had 4 friends with us and living together on a 35-foot boat was a real test of our friendships, a test we didn’t always pass. In a good wind we would head for Rock Island, but in a poor wind we’d only make it to Stockton. Sunday we’d have to rush back to Madeline (and that’s hard to do on a boat which averaged 4 knots), catch another ferry, and then try to stay awake for the 4 hour drive home. A hectic pace, but we loved it.

I should interject here that the reason Steve came to Lake Superior was that he missed the ocean and Cape Cod where his family had spent their summers. I said if he needed an ocean I had one for him, and it had fresh water. It was love at first sight and he has been coming here almost every summer since 1964. He is drawn to the lake and especially sailing.

In the 1970’s my parents bought a house on Madeline, which rooted us there for 25 years. But, we often looked across at Bayfield (actually our house looked directly at Roy’s Point) and wished we were on the mainland. When we sold that house we started looking for a new place and remembered hearing stories that Bob Davidson, who had once been a member of Steve’s law firm, was selling cottage sites somewhere near Bayfield. We discovered the site, but for several years found no activity there. Then in 2000 we looked again and the project had finally taken off and there were models to look at and a very eager Bob Davidson ready to sell us a piece of paradise. We were pushovers. I had always wanted a cabin in the woods with that big-screened porch, and Steve wanted to have a sailboat, so it was a perfect marriage.

How did you end up at Brickyard Creek? We strongly encourage you to share your story. Each member of the community has a unique and inspiring answer to this question. Reach out to community manager Jeffery Garrett today to get started.