The establishment of a railroad line was essential for the financial success of Bayfield and the development of the surrounding area. After waiting twenty-seven years, the town finally got its first railroad – the Chicago, St. Paul, Minneapolis & Omaha (the Omaha) Railway – which arrived in Bayfield with much fanfare on October 12, 1883. The Omaha Railway constructed a spur to Pike’s “Little Daisy” sawmill on Manypenny Avenue but did nothing else to provide rail service to the Bayfield waterfront or out to Red Cliff.

William F. Dalrymple was born on April 17, 1825 in Sugar Grove, Pennsylvania. He began his career by teaching at a public school in Warren County, PA, where he was appointed county superintendent of schools. He eventually left teaching and established a business in the lumber industry, acquiring property interests in Pennsylvania as well as in Milwaukee, St. Paul, and Fargo. He and his brother, Oliver, purchased extensive tracts of land in North Dakota where they created a large wheat farming operation.

Dalrymple came to Bayfield in 1882 believing that the town could become a major port city on Lake Superior. He had a grand scheme to provide for the cheap transportation of grain from his wheat farm in North Dakota by rail to Lake Superior where it could then be placed on ships that would dock at a massive wharf at Bayfield and sent on to the east coast.

William, Oliver, and three other men organized the Bayfield Transfer Railroad Company. They bought, rebuilt and extended the original Vaughn dock at the foot of Washington Ave., ran track starting at the Omaha depot on Manypenny Ave., obtained a right of way across the Red Cliff Reservation, and bought all of the waterfront property between Bayfield and Red Cliff including 100 acres at Roy’s Point, for a total of 1200 acres.

Dalrymple envisioned the creation of a town (named Dalrymple of course) between Bayfield and Red Cliff, as well as a harbor system that was designed to extend north out of Bayfield all along the coast with a solid line of slips, warehouses and docks for loading passengers and freight. The entire harbor system was to be serviced by a four-track main railroad that would run along the shoreline from Bayfield to Red Cliff and then inland through the Reservation to eventually connect to the St. Croix-Superior Railroad. 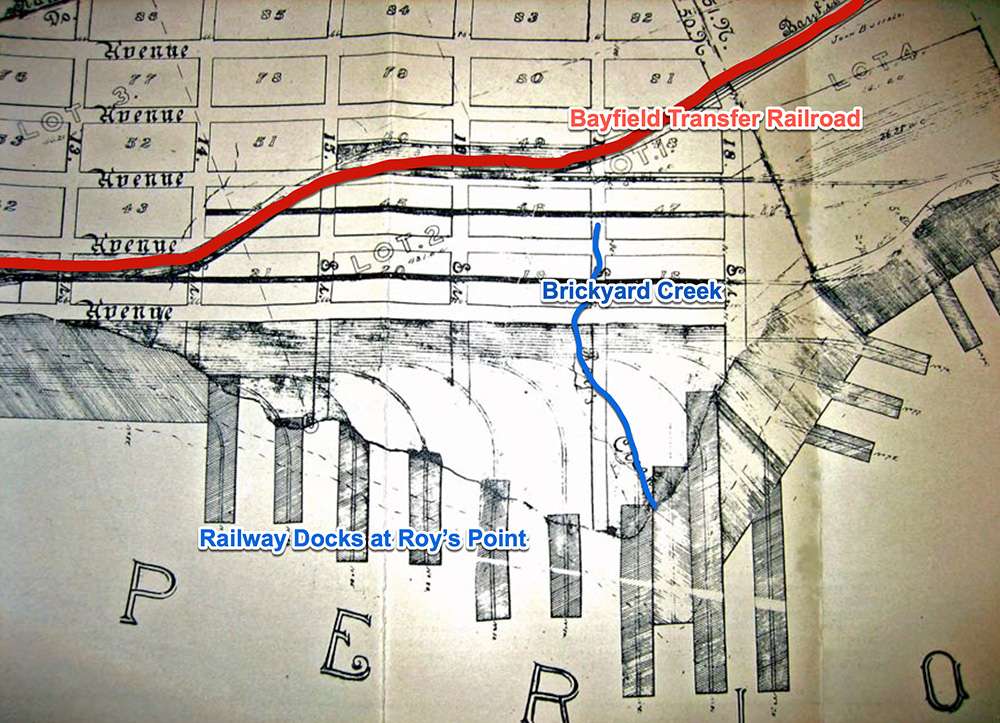 Dalrymple’s wharf and railroad project lay dormant until 1892 when two miles of right of way was graded. Then, the Financial Panic of 1893 put a temporary end to his plans. The resulting four-year depression didn’t come to an end until 1897, but by the summer of 1896 construction of the Transfer Railway line began when four miles of track started to be laid. It was not until 1898 that the line was completed to Buffalo Bay and ready for operation.

There was an immediate economic impact resulting from the extension of the railway north out of Bayfield. The Red Cliff Lumber Company was established in 1897. This was the first industrial enterprise established on the Reservation employing 110 men at the mill and yards and additional men at a new store and boarding house. The company operated a sawmill and a planeing mill at the northern end of Buffalo Bay where the campground and casino are currently located.

Logging camps were set up in the surrounding areas. The mill not only provided jobs for the men on the Reservation but also attracted many other people who came to live in the “Swede Town” section of town, a community of about 15 -18 families. Thirty-five new homes were built on the Reservation, and the Catholic Church opened a school for forty children. Unfortunately the mill burned down in 1905. It was rebuilt in 1907 but burned down again in 1910 and was never restored. 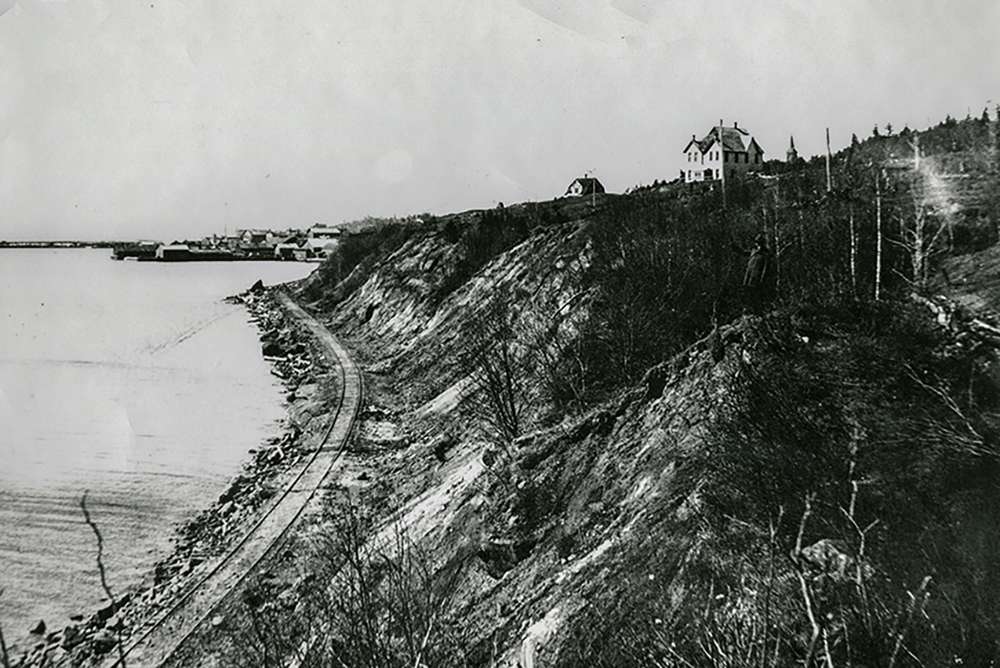 Roy’s Point was transected by two sets of railroad tracks that branched off from the shoreline track shortly before crossing a ravine on what is now Ken Dobson’s property. One set of tracks proceeded northwest across the creek and Highway 13 and out to the lumber camps, while the second set proceeded along the shoreline to the Red Cliff Sawmill. Two spurs were later added off this second line to the sawmills that were built at Roy’s Point in 1900 and 1910. A total of only 15 miles of track was ever laid for the Transfer line. The farthest it got was Racket Creek.

The first train ran on the Transfer line on April 25, 1898. Soon trains were making three round trips a day carrying passengers, freight, and mail. Once the Transfer was in operation it became so popular that Sunday trips to Buffalo Bay were added. During the summer, baseball games were played at Roy’s Point and the kids in Bayfield would walk out to the baseball field along the tracks knowing that the crew of the Transfer would give them a free ride back to town.

The train ended up carrying a negligible amount of passenger traffic and Dalrymple soon found it more profitable to lease the railroad for the transfer of lumber and logs from the lumber camps and sawmills on the peninsula to the Omaha Railroad tracks in downtown Bayfield. 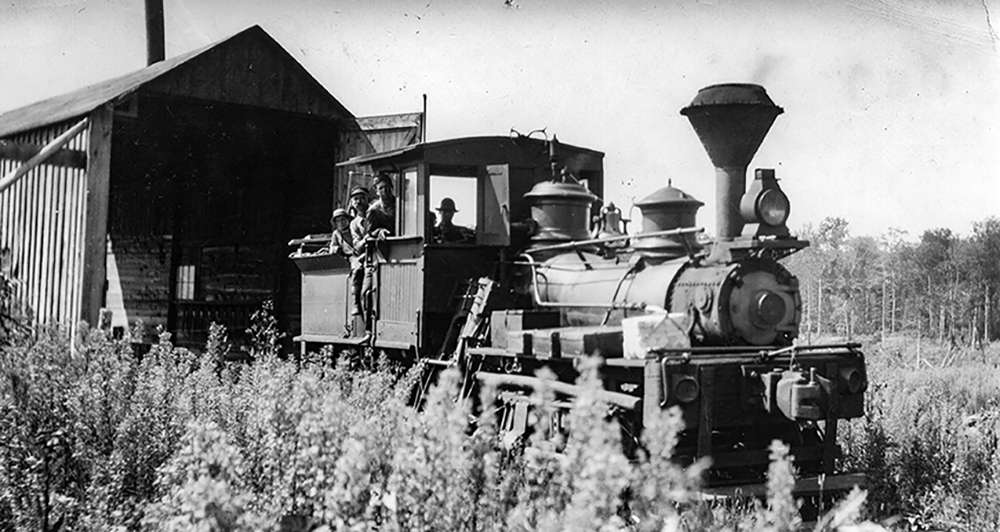 Fortunately for today’s residents and visitors, the dock and warehouse facilities that Dalrymple had envisioned were never built. Dalrymple died in 1901 and while his town project was never realized his name is still recognized around town. The land on both sides of Highway 13 from the Roy’s Point Boulevard up to Bressette Road is still referred to as the Dalrymple Subdivision and just north of Bayfield is the Dalrymple Campground.

In 1914 the Wachsmuth Lumber Co. purchased the right-of-way for all of the railway lines and ran The Transfer as a private logging railroad, shuttling crews and lumber between the company’s logging camps, across Roy’s Point, and to its mill in Bayfield. The Transfer still existed as a common carrier to haul freight, but all passenger service between Red Cliff and Bayfield ceased at this time. 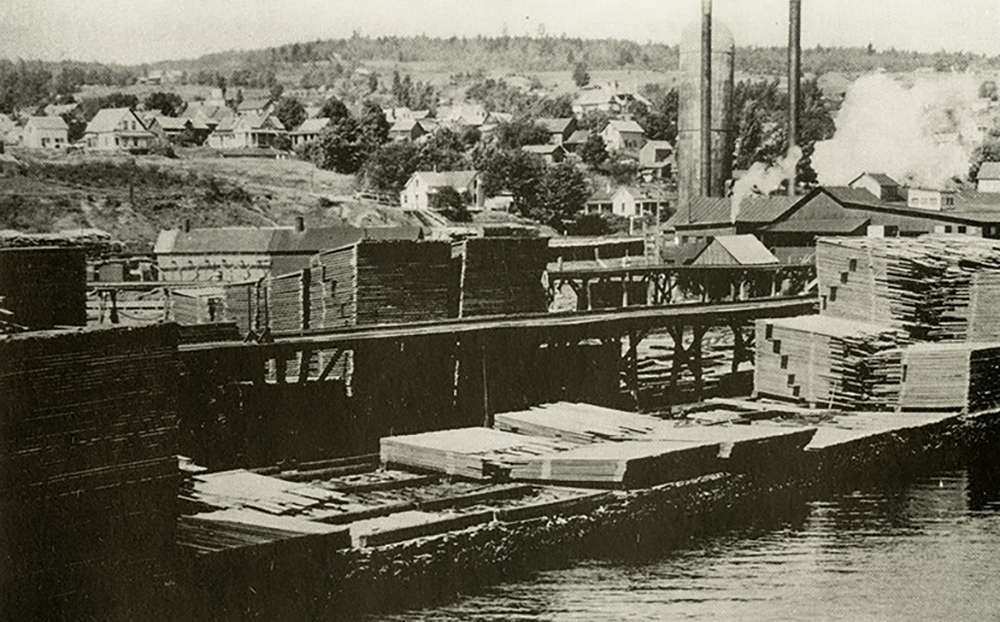 Bayfield panoramic about 1910, showing lumber piles at Bayfield to be shipped from the Wachsmuth mill. The mill closed in 1924. Photo courtesy of Bayfield Heritage Association. Photo ID: 1970.37.9

The Wachsmuth mill closed in September, 1924 at which time the Bayfield Transfer folded, as there was no need for a logging railroad. The rails used on the logging road were taken up and almost all of the steel and railroad equipment was sold to a Chicago concern, with a small portion of the rails going to the Schroeder Lumber Co. of Ashland. From 1924 to 1933 the Bayfield Transfer Company continued to exist as a corporation but did not operate any trains, and its only revenue came from renting out its office space. The original rail beds through Roy’s Point are still visible, especially across the lakefront lots, and the bed for the logging train forms the base for one of the nature trails running from the top of Sophie Lane to the creek.