Chapter 1: In the Beginning

Every good story starts “once upon a time”, so why not this one?

Once upon a time the area now known as the Roy’s Point Marina and Brickyard Creek Condominium was, like all of Northern Wisconsin, covered by a virgin forest of red and white pine, immense hemlock, balsam, cedar, and hardwood trees. The first humans to inhabit the land were members of the Ojibwe Nation who came through the Great Lakes from the Atlantic Coast and into Lake Superior around 1490. These Native Americans settled primarily on what is now Madeline Island and did their hunting, gathering wild rice, and camping on the mainland.

The first Europeans to arrive in the area were the 17th Century fur trappers and traders, along with Jesuit missionaries, who built a fort on the island. Wisconsin became a state in 1848, but it wasn’t until the 1850’s, with the completion of the canal at Sault St. Marie, that the development of Northern Wisconsin became more financially feasible. 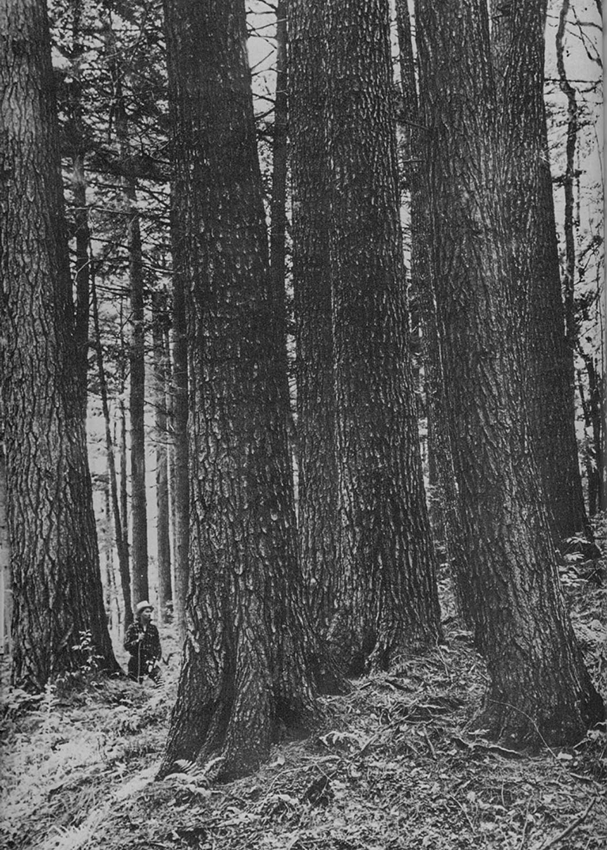 An example of the type of virgin timber that existed on the Bayfield peninsula. Click the image to enlarge.

In order to make land in the Wisconsin Territory available for sale to white developers and settlers more than 70 treaties were negotiated with the Native tribes, including the Treaty of September 30, 1854 between the U.S. Government and the Ojibwe on Madeline Island. This treaty opened up the way for land acquisition in and around what became the town of Bayfield.

The Treaty also set aside four sections of land for Chief Buffalo in recognition of his role in the negotiations. All of the other members of the La Pointe Band were to go to the Bad River Reservation, but so many of Chief Buffalo’s followers went instead to Buffalo’s land that the 1854 Treaty was amended to create the Red Cliff Reservation, and an additional 14,000 acres of land was set aside in 1863 for the Band.

The first known white settler in the Bayfield area, other than the traders and missionaries, was Elisha Pike who arrived with his wife and two children from Toledo, Ohio in October 1855. Also arriving in 1855 was Henry M. Rice, a businessman and politician from St. Paul who had been granted a patent on 349 acres of land on the site of an old Indian village on the mainland. Rice’s friend and interpreter, Vincent Roy Jr., was granted a patent on 100 acres of land about two miles north of Bayfield and adjacent to Chief Buffalo’s allotment.

The Economic Panic of 1857, followed soon after by the Civil War, put a temporary halt to the development of Bayfield. In 1862 a road between Bayfield and the Red Cliff Reservation was constructed, with the Native Americans providing much of the labor.